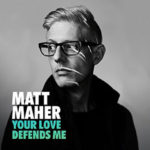 We’re seriously crushing on the song “Ave Maria” from Matt Faley right now. It’s perfect for this month of May that’s dedicated to Our Lady, and this sublime video only makes it better. Check out his music at his website and pick up his music today at Amazon or iTunes.

The Josh Blakesley Band released a new video this week of one of their favorite songs “Hope Comes Alive”, from their newest album “Even In This”. The footage in the video comes from several Steubenville Youth Conferences they did last year. The energy and excitement you see in the video is quite amazing, and they hope it blesses you. For tour dates and more info about the band, check out their website: JoshBlakesleyBand.com

Check out Teresa Peterson’s new video for “He Makes All Things New”, from her debut EP “Freely, Fully”. She offers this song and video in celebration of the Feast of ‪Divine Mercy‬ in ths ‎Year Of Mercy. Teresa will be appearing in our fundraising pledge drive for Holy Family Radio, the producer of the Catholic Playlist Show. Catch her interview live, April 6 at 2:00pm Eastern using the streaming at our website here.